As in previous years, four campaigns of examinations and operations with the mobile eye clinic take place throughout Cameroon in 2020. 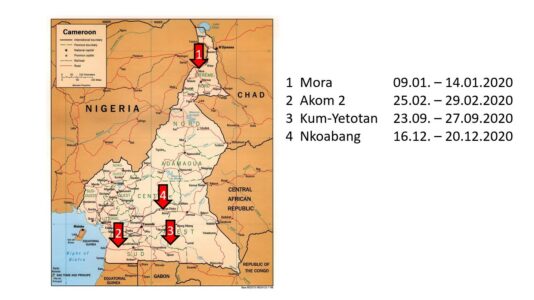 The four campaigns of examinations and operations of 2020

The first campaign of the year takes place in Mora in the Far North region. Examination and operation campaigns took place here already in 2013 and 2014, during which the two ophthalmologists Dr. Raoul Cheuteu and Prof. Dr. Giles Kagmeni have been able to restore sight to many blind people.

This year too, the blind and visually impaired are flocking in droves, often led by supportive family members. Among those who have been already operated on is Mohammed, who is now eleven years old and whose first eye for cataract was operated on in 2014. Now is the turn of the second eye. 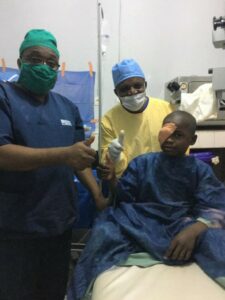 Tsoume, with a badly burnt face, can finally see again after four long years of blindness. Due to the often open fire, terrible burns occur time and time again, especially in rural areas. Of course, blind people are particularly at risk. 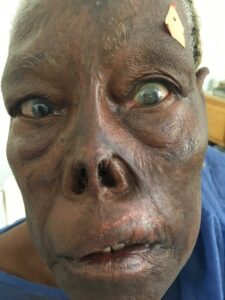 Tsume before the operation, … 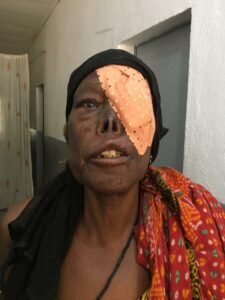 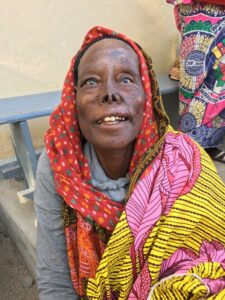 … and then she can see again a day later after removing the bandages. 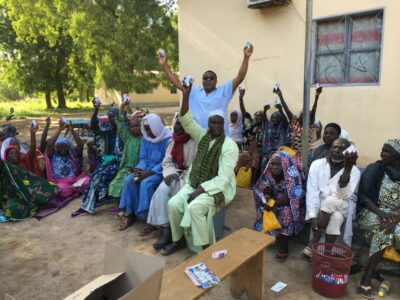 Many people in Mora finally can see again.

A total of 480 eye exams and 63 operations are performed in Mora, all with cataracts with one exception. In addition, 26 bespoke glasses are given to visually impaired people in need. 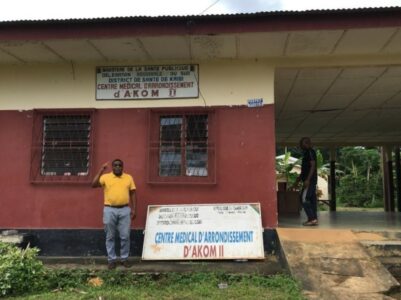 The second operation campaign in 2020 takes place in Akom 2. While the Kacheu Medical Foundation team is preparing everything for future examinations and operations, more and more eye patients are arriving with their loved ones. Preliminary examinations begin. Patients scheduled for the operation are given markings on their foreheads that provide information about where and what needs to be operated on. As always, cataract patients predominate. 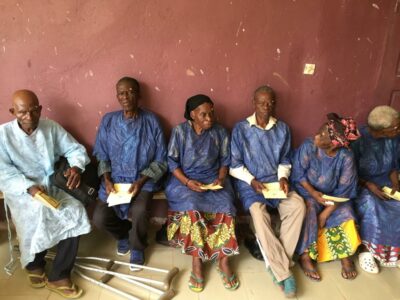 These patients, recognizable by their blue dress, are waiting for their operation.

To facilitate differentiation, the next patients due for surgery are wrapped in blue robes. The two doctors Dr. Cheuteu and Professor Dr. Kagmeni start the operations and operate in turn. While the operations are in progress, examinations continue in neighboring rooms. Master optician Max Heinrichs from the German partner organization Augenhilfe Afrika came from Europe with his wife Ulla. He supports the Cameroonian team of the Kacheu Foundation in Akom 2 with his many years of professional experience. 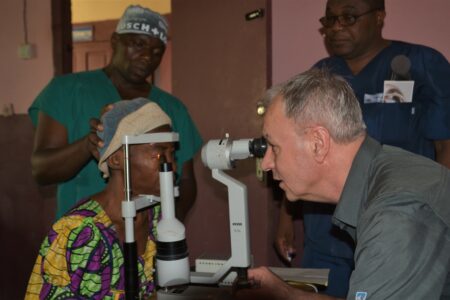 Many patients at the Akom 2 campaign site have severe corneal damage that they suffered while working in the forest and in the fields. And not everyone can be helped. In the case of several patients, the eyes are irreparably damaged. Fortunately, however, the treatable cases far outweigh the problems. 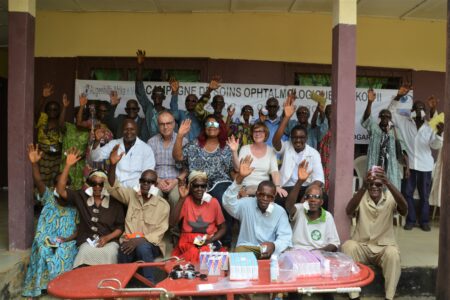 Farewell photo. Everyone who was operated on received sunglasses to protect the eyes.

A total of 320 eye exams and 41 operations can be performed. There are also 25 bespoke glasses. 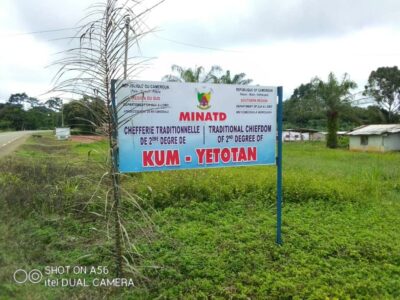 Kum-Yetotan, the third site of the campaigns in 2020, is located southeast of Yaoundé roughly halfway from the capital to the Congolese border. Due to the heavy workload of the Yaoundé ophthalmological clinic, Prof. Dr. Kagmeni holds the post there and cannot participate in the campaign. As on previous occasions, he is replaced by Dr. Gabriel Kouagang. 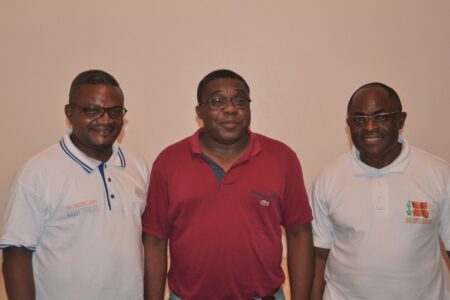 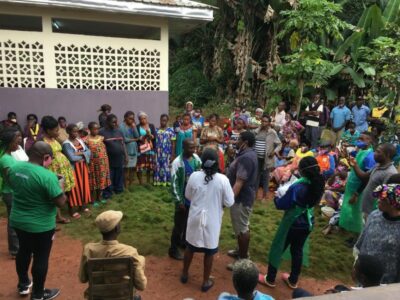 Patients and their families in Kum-Yetotan

Already 28 operations take place on the first day. At the same time, the eyes are measured, the glasses rectified, and in the simplest cases, reading glasses are distributed. The importance of reading glasses should not be underestimated in this context. They can also mean a considerable improvement in the living conditions of the visually impaired person concerned. 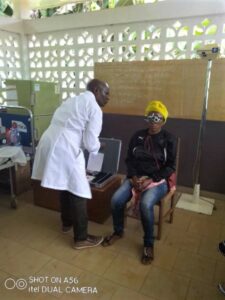 Patient Paul, an elderly man, has been blind for 5 years. He suffers from cataracts. “I cannot see anymore. When I go there I often fall and people laugh at me. I can’t afford an operation in a clinic. I have no money. This is why I now hope for the Kacheu Foundation. ” 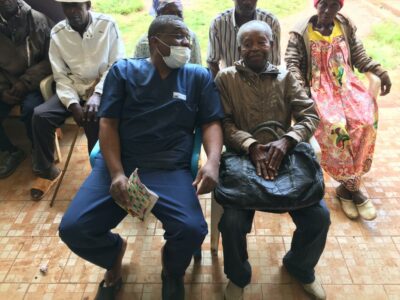 Dr. Cheuteu with patient Paul before the operation

When the bandage is removed the day after the operation, a beaming smile appears on his face. He claps his hands enthusiastically. He can see again. He laughs and chuckles, looks at Dr. Cheuteu and comments: “I love your shoes.”

For Dr. Cheuteu the reaction is not surprising: “A blind man no longer smiles because he no longer sees the smiles of others. By restoring sight to patients, we are taking them out of their isolation. The effects of the operation are visible immediately after removing the bandages. The smile reappears almost immediately on the faces of the patients. ” 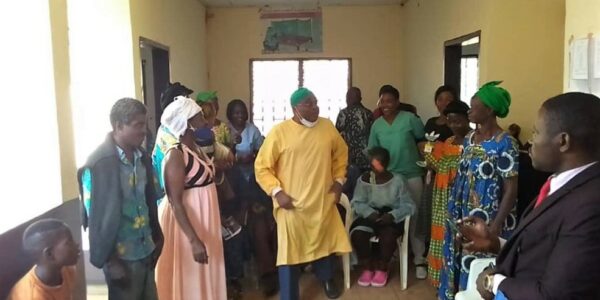 Dr. Cheuteu with patients and relatives in front of the examination room

A total of 400 eye exams are performed at Kum-Yetotan, 52 eyes are operated on, and the almost unbelievable number of 50 bespoke, individually cut lenses and 300 reading glasses are distributed. The latter were donated by a local woman. 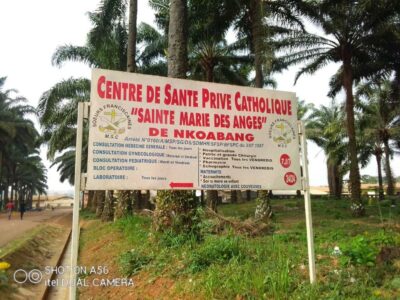 The fourth and final surgery campaign of 2020 finally takes place in Nkoabang in mid-December. This place is located about 250 km northeast of the capital Yaoundé. The actual location of the event is the Catholic Hospital “Sainte Marie des Anges”. And this hospital is a real gem. Everything is absolutely clean, there is no litter lying around and there are well-kept grounds with flower beds and bushes. 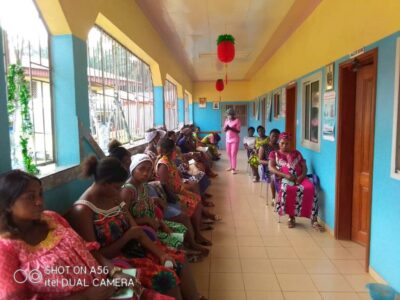 The young Audrey Tikombouo is participating in a campaign for the first time. After completing her nursing training in mid-2023, she will join the Kacheu Foundation team in Ambam. In the current campaign, she is intervening wherever there is an emergency, to help the team of opticians determine the ability to see, when using eye drops for local anesthesia before the operation or in the operating room. 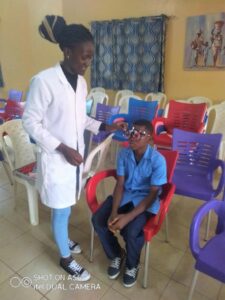 As is generally the case with surgical campaigns, Dr. Cheuteu and Professor Dr. Kagmeni take turns at the operating table. And as always, cataract operations make up the vast majority of surgeries in Nkoabang. A total of 328 eyes are examined, 43 operations performed and 35 bespoke glasses are given to visually impaired patients. 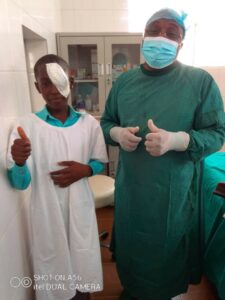 In 2020, the success story of the Kacheu Foundation can continue with another chapter. A total of 1,528 examinations, 199 operations and 136 bespoke glasses represent the four campaigns described. 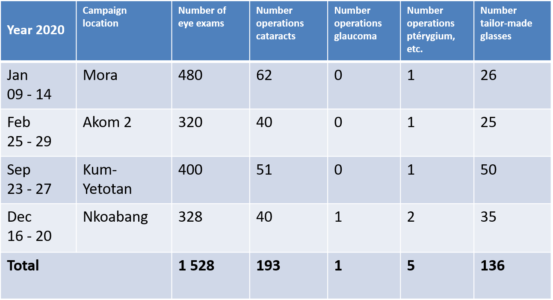 Results of the four 2020 campaigns

These successes were made possible on the one hand by the tireless and unpaid work of the two ophthalmologists Dr. Raoul Cheuteu and Prof. Dr. Giles Kagmeni and on the other hand with the financial support of the German association Augenhilfe Afrika e.V.